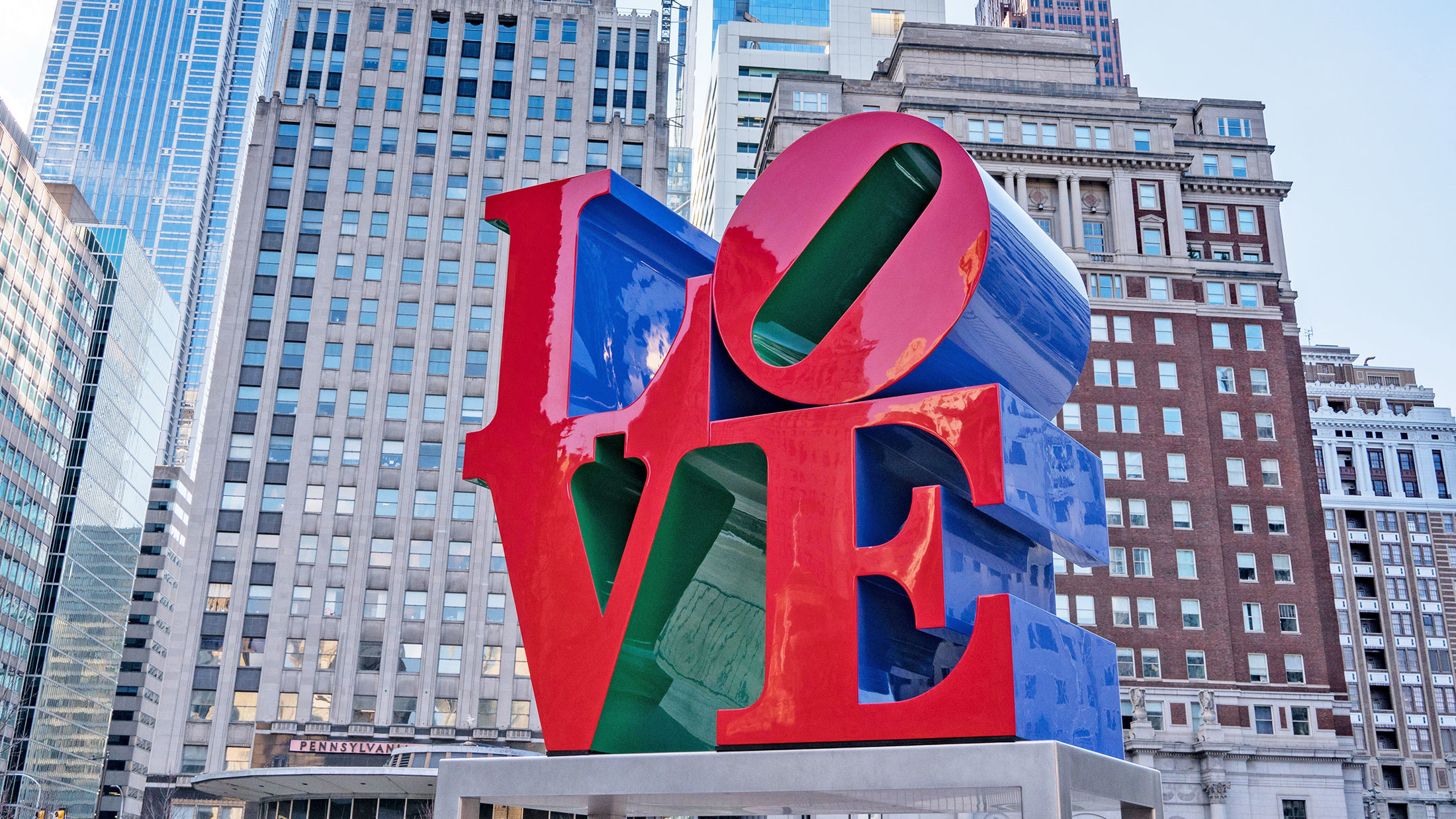 An iconic work of art by Robert Indiana...

One of the City of Brotherly Love’s best-known landmarks is LOVE itself. Photo by Paul Brady / Alamy Stock Photo

No Philly experience is complete without snapping a photo in front of one of The City of Brotherly Love’s best-known landmarks: LOVE itself.

The famous Robert Indiana sculpture is in John F. Kennedy Plaza — better known as LOVE Park — just northwest of City Hall. Installed in 1976, LOVE was briefly removed in 1978, but popular demand brought it back where it belongs.

In conjunction with the renovation of John F. Kennedy Plaza, the sculpture was restored, repainted and reinstalled in its original location in 2018.

Jump To
THE HISTORY
DON'T MISS
BOOK YOUR STAY
Previous Next

The LOVE sculpture resides in LOVE Park, located across the street from City Hall in Center City Philadelphia, and is free to visit.

Residents and visitors often line up to have their picture taken with the iconic artwork, sometimes asking the person or people behind them in line to snap their photo.

Don’t miss your chance to snag one of the quintessential images of Philadelphia in front of the sculpture, with the Benjamin Franklin Parkway and the Philadelphia Museum of Art (or, if it’s on, the fountain) in the background.

more about the love sculpture

Robert Indiana debuted the design for his famous sculpture as a painting in 1964. After constructing the aluminum piece, Indiana lent it to the City of Philadelphia as part of the U.S. Bicentennial in 1976.

The sculpture moved briefly to New York until a local businessman bought it and donated it to Philadelphia. In February 2018 — after a year away from public view — the sculpture returned with a new color scheme of red, blue and purple instead of blue.

An iconic image synonymous with Philadelphia, the piece’s likeness has been recreated on items ranging from postage stamps to jewelry.

After snagging a photo with the LOVE sculpture, stick around and explore LOVE Park, also home to green areas, a fountain, walking paths, seatings and the LOVE Park Visitor Center, which opened in May 2021.

Designed to let visitors and vendors use the space as needed, LOVE Park creates an environment that brings together world travelers, lunchtime snackers, sunbathers, fitness buffs and performers.

It also hosts Philadelphia’s annual Christmas Village, where dozens of vendors sell gifts, handmade crafts and snacks in an open-air market each November and December.

To mark the historic visit by Pope Francis to the United States and Philadelphia in September 2015, the Philadelphia Museum of Art and the Association for Public Art teamed up to install Robert Indiana’s tremendous sculpture AMOR atop the museum’s steps on the east terrace overlooking the Benjamin Franklin Parkway.

In December 2016, the six-foot-tall sculpture — “amor” translates to “love” in both Spanish and Latin — was moved and permanently installed at Sister Cities Park, just a short walk from LOVE Park.

Visitors interested in learning more about AMOR can download an audio program from the Association for Public Art — available in English and Spanish — that helps to interpret the piece and includes rare archival recordings of Indiana, who died in 2018.

more about the amor sculpture

Where to Find Cool Public Art in Philadelphia