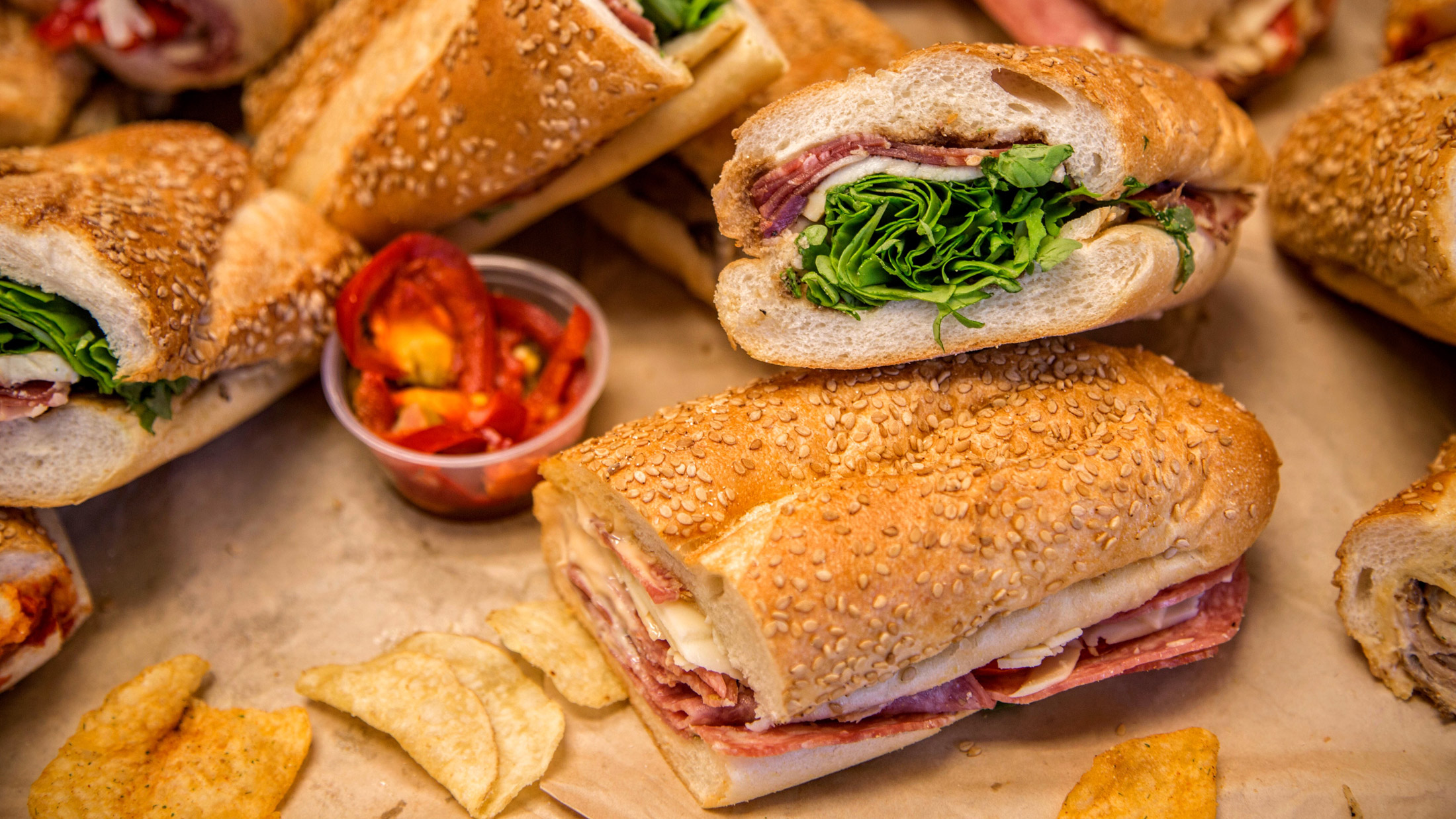 Where to Find the Best Hoagies in Philadelphia

Matt and Marie's Photo by C. Smyth for Visit Philadelphia

Philadelphia has a thing for great sandwiches. We know them. We love them. We eat them. It’s what we do.

From the world-famous Philly cheesesteak to its less famous but equally delicious hoagie to the third juggernaut in Philly’s sandwich triumvirate, the roast pork sandwich, Philadelphia is a sandwich-lover’s dream.

It’s clear there are a lot of great sandwiches in the City of Brotherly Love, but let’s talk about the hoagie. For those unfamiliar, the classic hoagie is made built-to-order on a long Italian roll and is typically filled with deli meats and cheeses and finished with lettuce, tomatoes, onions, a sprinkle of oregano, and a drizzle of oil and vinegar.

However, hoagies are as diverse as their makers, sometimes coming stuffed with tuna, chicken cutlets and roasted vegetables, or topped with punches of flavor like fried long hots, sautéed greens, artichokes and more.

What separates a hoagie from a ham-and-cheese sandwich? It’s the bread. The best hoagies are made atop bread delivered daily from the local bakery. From there, it’s all about the quality of the provolone, the prosciutto, the soppressata, the roasted peppers and whatever else might be going inside.

Accounts of the hoagie’s origin vary greatly. It could have come from Italian-American shipyard laborers, nicknamed “hoggies” due to their work around South Philly’s Hog Island, who brought sandwiches stuffed with meats, cheeses and vegetables for lunch during the late 19th and early 20th centuries. Others say it came from late-19th-century street vendors known as “hokey-pokey men,” who sold antipasto salad, meats and cookies on long loaves, with “hokey” eventually becoming “hoagie.” Lastly, some say Catherine DiCostanza of A. DiCostanza grocery store in Chester, Pennsylvania, invented the sandwich in 1925 when a late-night visitor asked for a sandwich with everything in the store’s case on it.

No matter where they came from, there’s one thing everyone can agree on: Hoagies are delicious, and Philly does ’em better than anyone. Read on for our guide to some of the best spots for authentic Philly hoagies in the City of Brotherly Love.

Note: The eateries in this article — which was last updated in March 2021 — are arranged alphabetically.
01

Already a local legend for the New York City- and Trenton-style pies he creates at Haddonfield’s Angelo’s Pizzeria, Danny DiGiampietro has moved across the river and reopened in Bella Vista. There’s house-made dough, of course, but also hoagies that would make any South Philadelphian (or anyone else, for that matter) take notice. Go for the Pops, with soppressata, dry-cured capicola, mortadell and sharp provolone. Truly old-school, it’s first-come, first-served, cash-only, with no phone.

In South Philly, still the spiritual home of the hoagie, loyalists swear by go-to shops like Antonio’s Deli. Bread from Sarcone’s — a fifth-generation Italian bakery in South Philly — are generously piled with meat, cheese, veggies and all the fixings. Two non-traditional hoagies have a loyal following at this gem: the crispy tomato hoagie with fried tomato, turkey, bacon and roasted peppers, and the loaded veggie hoagie with baked eggplant, aged sharp provolone and broccoli rabe.

Open since 1932, this tiny corner deli in South Philly churns out some of the best cheesesteaks, hoagies and roast pork sandwiches in Philadelphia. With more than a dozen hoagies on the menu, it can be tough to choose, but two of the many highlights are the Godfather (made with prosciutto, sopressata, fresh mozzarella, roasted peppers, sun-dried tomatoes, fresh basil, green olives, extra virgin olive oil and a splash of balsamic vinegar) and the Sicilian (made with prosciutto, sopressata, hot imported capicola, imported mortadella, sharp provolone and roasted peppers or long hots). Opt for the seeded roll, sourced from Philly’s famous Sarcone’s Bakery.

The huge menu at Datillo’s Delicatessen might just be the least of what hoagie lovers can expect at this Rhawnhurst institution. For more than four decades, the Dattilo family has served up not only excellent hoagies, cheesesteaks, burgers and salads, but also neighborhood charm, welcoming generations of families through their doors. Don’t miss the Main Event hoagie with hot capicola, pepperoni, Genoa salami, provolone, marinated artichoke hearts and homemade roasted peppers. Plus, take away Italian specialties from the market like pasta, olive oil, espresso and olives.

Talk about raves: The hoagies at this small Fishtown shop have earned acclaim from Philadelphia Inquirer food writer Craig LaBan and Philadelphia magazine, which named the delectable creations here as the region’s best hoagies for 2020. Both namecheck the Della Casa, featuring hand-stretched Caputo mozzarella, 1732 Meats gabagool and Calabrian chile, though you really can’t go wrong with anything on the short-but-tasty hoagie menu. Also available: salads, mac and cheese, and tomato pie.

Marinucci’s Deli gives customers a lot of hoagie for their buck — one meat-packed sandwich can easily feed two people. The pro move here is the near-titular Nucci, a classic Italian hoagie with prosciutto, sharp provolone and roasted peppers. Those looking to expand their hoagie horizons have nearly 20 other hoagies to try out.

What say you to a waffle hoagie? It’s quality over quantity at this Kensington watering hole, starting with this breakfast-meets-lunch creation featuring maple syrup and long hot pepper pesto. If that’s not on the menu, the Gladys (jerk turkey, pickled green tomato, roasted red pepper, allspice mayo and jalapeno) or the Syd Vicious (buffalo chicken, serrano, American cheese and fermented pepper aioli) should do nicely. Cheese and charcuterie plates, as well as extensive beer, wine and cocktails lists, round out the menu.

A relative newcomer to the Philly hoagie scene, sandwich progressives have been eating up Middle Child’s tongue-in-cheek takes on the hoagie, such as a Vietnamese-inspired vegan Pho-agie and a classic Italian that’s amped up with artichoke spread. Traditionalists win here, too, with the So Long Sal! sammie that loads up imported meats, cheese, artichoke spread and arugula on a Sarcone’s roll.

Located just a few blocks from the South Philadelphia Sports Complex, Pastificio has gained adoration for its Classic Italian hoagie topped with mild provolone, mortadella, capicola, Genoa salami and prosciutto. More than a dozen other hoagie options are also on the menu.

A shop originally from South Philly that’s grown immensely in recent years, PrimoHoagies has elevated the hoagie with a long list of delicious variants, including the Turkey Diablo and the Crusher. There are multiple locations across the Philadelphia region.

Perfecting the art of the hoagie since the 1920s, Ricci’s offers a classic South Philly sandwich experience. The must-order here is the Italian hoagie, but sandwich-lovers would do well to throw in an Italian tuna with each order. (You know, just to compare.)

Simply put, Wawa is a Philadelphia institution, with dozens of locations in the Philadelphia region and beyond. The store/deli has long been known for its hoagies, allowing customers to build their own with a huge variety of ingredients (though you can’t go wrong with the classic spicy Italian).

Where to Find the Best Cheesesteaks in...

Our picks for the best cheesesteak places to go for an authentic Philly experience...