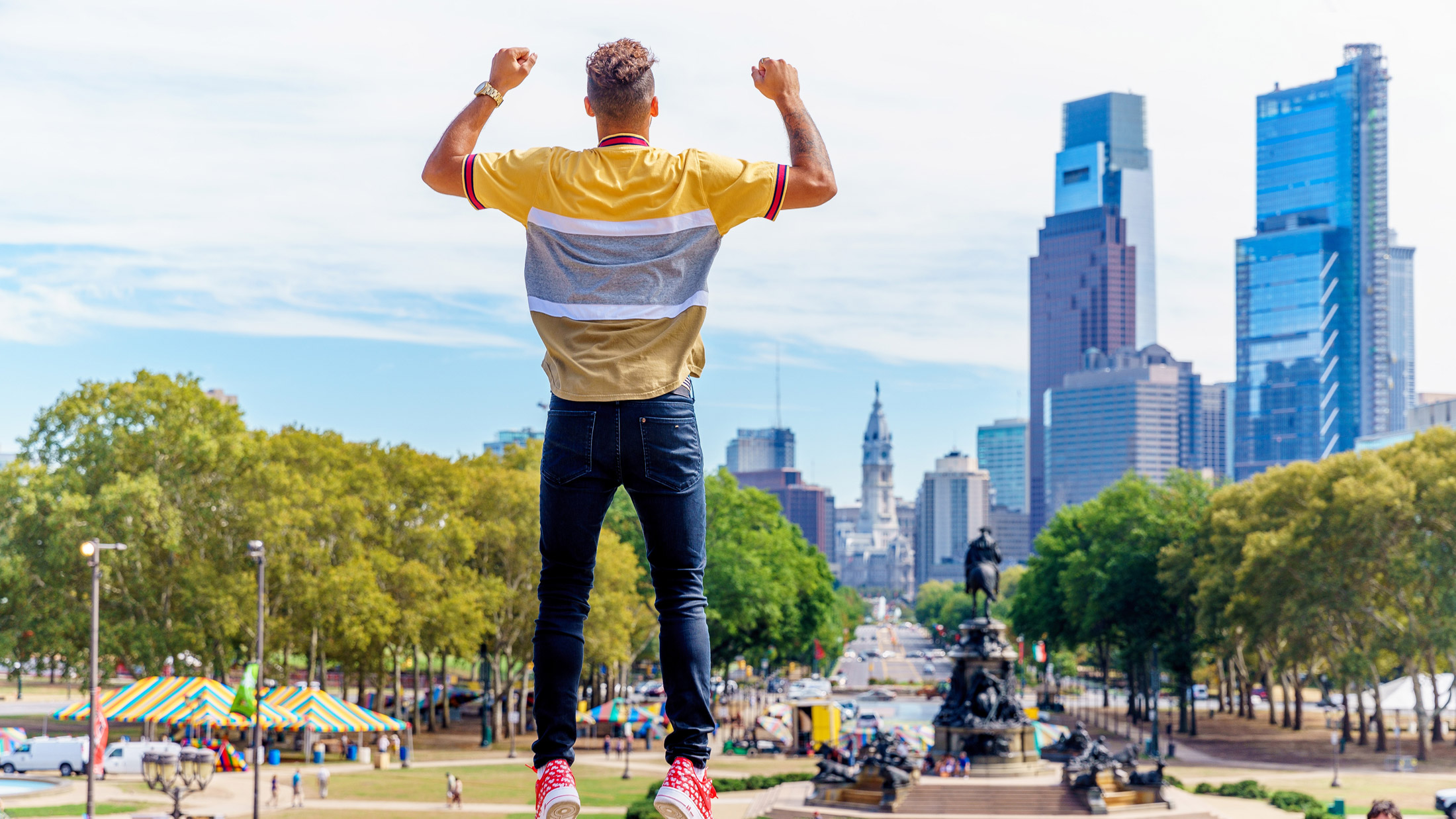 Two of the most famous tourist attractions in Philadelphia...

Visiting the statue, running up the steps and taking a picture at the top is a must on any first visit to Philly. Photo by Visit Philadelphia

The Rocky Statue and the “Rocky Steps” are undeniably two of the most popular attractions in Philadelphia.

A near-constant flow of people arrive daily at the bottom of the stairs at the Philadelphia Museum of Art to snap a picture with the Rocky statue, originally created for a scene in Rocky III and now a real-life monument to a celluloid hero who endures as a favorite fictional son of the City of Brotherly Love.

Visitors then often hustle up the museum’s grand stairway to try their hand at the famous two-arms-raised salute — all while soaking up picture-perfect views of the Philadelphia skyline.

In short, visiting the statue, running up the steps and taking a picture at the top is a must on any first visit to Philadelphia. Consider it a rite of passage. Here’s how to do it.

Visiting the statue, running up the steps and taking a picture at the top is a must on any first visit to Philly.

The Rocky Statue — a larger-than-life boxer — is one of Philadelphia’s most famous pieces of public art.

The fictional Rocky Balboa of Sylvester Stallone’s Rocky movies was immortalized in bronze by artist A. Thomas Schomberg in 1980 for a scene in the film Rocky III.

After the filming was complete, Stallone donated the statue to the City of Philadelphia.

Since 2006, the statue has been located at the bottom of the stairs at the Philadelphia Museum of Art, and there is a near-constant stream of people waiting in line to get their pictures taken with the “Italian Stallion.”

Just as famous as the statue are the steps leading to the east entrance of the Philadelphia Museum of Art, aka “The Rocky Steps.” Each year, tens of thousands of people recreate the scene from the legendary movie and make the trek up the steps.

Just be prepared to work for it — those 72 steps don’t climb themselves.

Snapping a photo with the Rocky Statue and running up the Rocky Steps is free. The Philadelphia Museum of Art has extensive info on getting to the museum area, which is accessible via walking, biking, public transit, ride share or driving.

Want to follow in Rocky’s actual footsteps? Check out our Rocky & Creed Tour of Philadelphia for a self-guided trek to city attractions and locations seen in the Rocky films.

Recreate the boxer’s famous run up the Museum of Art steps; grab an authentic cheesesteak at Pat’s, the very place where he stopped in the original Rocky; walk through the Italian Market and then stop by an old-school butcher shop, where (sorry) they’re probably not going to let visitors go to the back in order to use the hanging meat as a punching bag.

More at the Philadelphia Museum of Art

Once the jog up the steps and photoshoot are complete, visitors should strongly consider heading inside the Philadelphia Museum of Art, one of the largest art museums in the country.

Rising majestically at the end of the Benjamin Franklin Parkway, the museum houses vast collections of Renaissance, American and impressionist art, as well as spaces and galleries designed by Frank Gehry that opened in May 2021.

Bonus: On the first Sunday of the month and every Friday after 5 p.m., the Philadelphia Museum of Art offers pay-what-you-wish admission.

As of July 2021, a ticket grants two consecutive days of admission to the museum along with admission to the nearby Rodin Museum, which houses one of the largest public collections of Auguste Rodin’s works outside of Paris, including bronze casts of The Thinker and The Gates of Hell.

More About the PHILADELPHIA Museum of Art

City attractions and locations seen in the Rocky and Creed films...