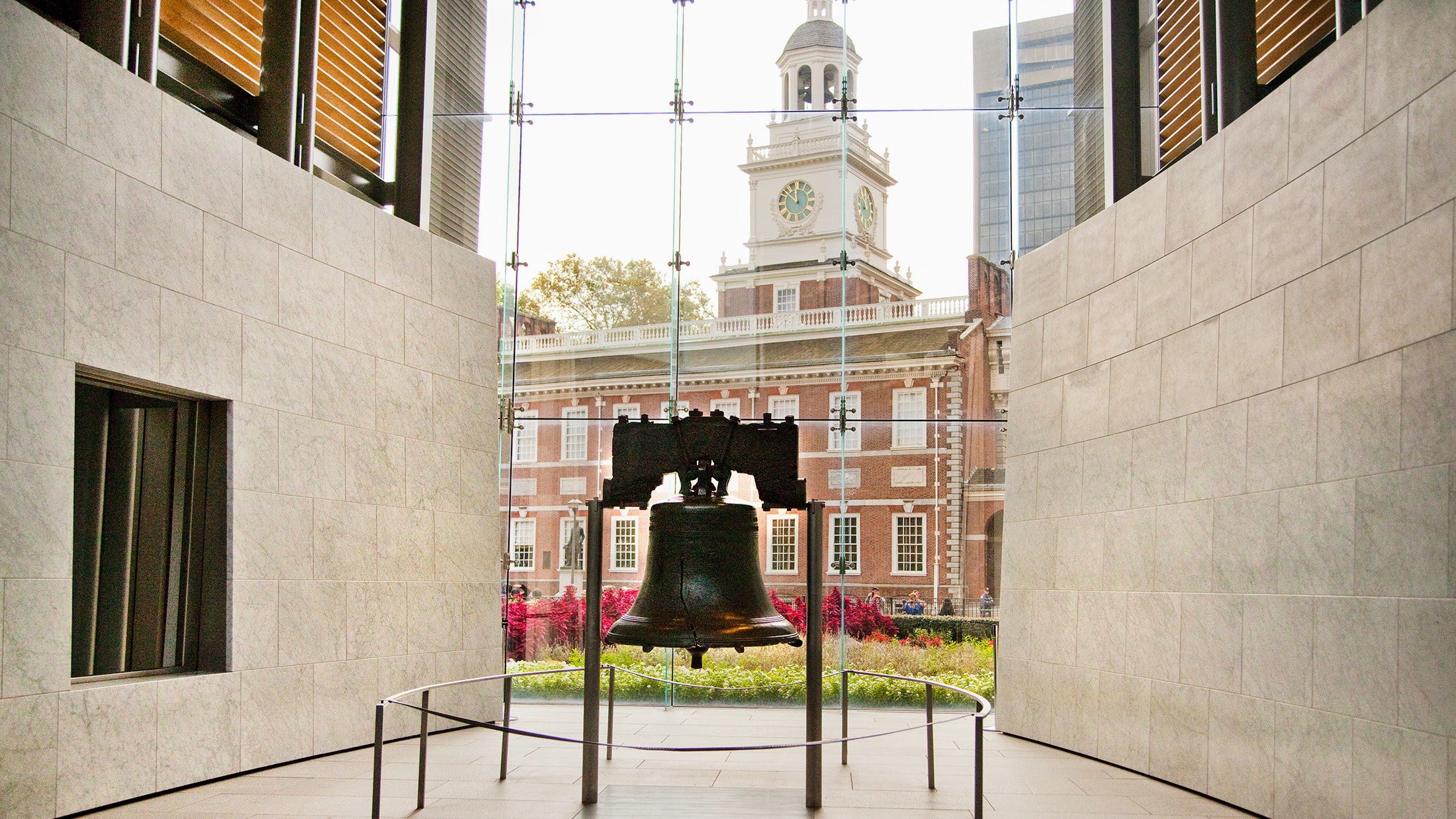 The can’t-miss experiences in the first World Heritage City in the United States...

There’s never a shortage of awesome things to do in Philadelphia, but there are some things youse just gotta do — especially if you’ve never been to our fair city before.

Whether it’s running like Rocky up those magnificent museum steps; refueling with a cheesesteak (an absolute mandatory); or bowing down to the history made at Independence Hall, devouring a roast pork sandwich (our other favorite sandwich) at Reading Terminal Market, and visiting one of the many mighty museums along the Benjamin Franklin Parkway, these are the experiences that make Philly so gloriously Philly.

Read on for the 10 most essential experiences to be had in the City of Brotherly Love.

Snap a photo in front of the Liberty Bell

Dramatic home of the internationally known symbol of freedom...

It doesn’t make a sound, but the Liberty Bell’s message rings loud and clear: “Proclaim liberty throughout all the land unto all the inhabitants thereof.” This inscription on the cracked but mighty Bell is one reason it became a symbol to abolitionists, suffragists and other freedom-seekers around the world. The Bell draws people from around the world to snag a photo in front of it and its dramatic backdrop: Independence Hall. Both sites are free to visit year-round with no tickets required, though capacity is limited to 62 people at a time as of January 2022.

Pose with the Rocky Statue & run up the "Rocky Steps"

Two of the most famous tourist attractions in Philadelphia...

Since Rocky’s first triumphant onscreen run up the steps of the Philadelphia Museum of Art in 1976, the 72 steps have become an international destination. Travelers from around the world embark on their own trek up the stairs, pumping their fists in the air as they cherish the spectacular view of the Benjamin Franklin Parkway and the city skyline. Cheesey? Definitely. Fun? Absolutely! To finish off the experience, head to the bottom of the stairs and snap a photo with the bronze statue of Rocky, originally created for Rocky III. (Then, venture inside one of the country’s most magnificent art museums. We promise it won’t disappoint.)

Where: Rocky Statue and Rocky Steps, outside of the Philadelphia Museum of Art, 2600 Benjamin Franklin Parkway

You have to eat one — or more — on your first visit to Philadelphia...

The Philly cheesesteak is inarguably the city’s most famous food. So put your diet on hold for the day, and indulge in a hoagie roll filled with chopped (or thinly sliced) steak and your choice of cheese and/or fried onions. Those in the know order their cheesesteak with two words only: cheese selection (provolone, American or Whiz) and “wit” or “without” onions. The debate about which local spot cooks up the best sandwich won’t ever end, but for an iconic Philly experience, visit the intersection of South 9th Street and Passyunk Avenue, where rivals Geno’s Steaks and Pat’s King of Steaks feed the masses daily, and do your very own taste test.

Tour Independence Hall, the birthplace of the United States

Where the Declaration of Independence was signed and where the U.S. Constitution was created...

While historical attractions abound in Philly, Independence Hall is where the nation was founded. In 1776, the Founding Fathers signed the Declaration of Independence in the building’s Assembly Room. Just 11 years later, representatives from a dozen states met here to lay the framework for the U.S. Constitution. Today, the goose bumps-inducing UNESCO World Heritage Site is the centerpiece of Independence National Historical Park, and guided tours of this bucket-list gem are available year-round. As of January 2022, free tours of the Hall are available via timed tickets. Learn more about how to obtain tickets in our guide to Independence Hall.

An iconic work of art by Robert Indiana...

The City of Brotherly Love is filled with love—literally. One of best-known landmarks is LOVE itself — the Robert Indiana sculpture in John F. Kennedy Plaza (or LOVE Park, as it’s affectionately called by most) that’s a prized photo op for couples, families and friends eager to show the world how they feel about one another. The sculpture was restored and repainted in 2018, and the park was entirely redesigned to add more green areas and a high-tech water feature. A small visitor center kiosk was added in 2021. Another LOVE statue sits just west of Center City on the University of Pennsylvania campus near 36th and Locust streets. And because love comes in all languages in Philadelphia, there’s an AMOR sculpture — a Spanish edition of the LOVE sculpture — on display at Sister Cities Park, a six-minute walk from LOVE Park.

One of America's oldest farmers market and current food paradise...

Set below a former railroad terminal, Center City’s 127-year-old Reading Terminal Market serves as both a dazzling tourist destination and a trusted source for fresh produce, seafood, meats and cheese for locals. The public space also provides open seating where customers can enjoy a world of cuisines from dozens of restaurants, including Pennsylvania Dutch vendors and sandwich slingers like the acclaimed DiNic’s, serving up hot roast pork sandwiches that rival the city’s much-lauded cheesesteaks. Retail merchants sell housewares, jewelry, linens and more. As of January 2022, the market is open for indoor dining (with proof of vaccination) and shopping.

Visit the awesome museums on the Benjamin Franklin Parkway

The Benjamin Franklin Parkway, modeled after the Avenue des Champs-Élysées in Paris, is called Philadelphia’s most artistic mile for good reason. Some of the city’s most important cultural institutions are housed here, including the Barnes Foundation, The Franklin Institute (how can you not love that giant Heart?), The Academy of Natural Sciences of Drexel University and its crown jewel, the Philadelphia Museum of Art. (Another super-popular attraction, former prison Eastern State Penitentiary, is just a 15-minute walk from the Philadelphia Museum of Art.) Note that, as of January 2022, some attractions are operating under limited hours and only on select days, so be sure to check ahead (and consider buying tickets online) before swinging by.

Where: Various locations including the Barnes Foundation, 2025 Benjamin Franklin Parkway

Amble through the world-renowned Longwood Gardens

One of the world’s premier horticultural display gardens...

It’s not in Philadelphia proper, but the horticultural legend that is Longwood Gardens is well worth the 50-minute drive from Center City Philadelphia to Kennett Square. Spectacular, epic, brilliant, breathtaking — all of these adjectives adequately describe the Chester County mega garden and its 1,000+ acres filled with 20 outdoor gardens, 20 indoor gardens, 11,000 different types of plants, dancing fountains and meandering meadows and woodlands. The colorful oasis also hosts hundreds of events each year, including flower shows, gardening demonstrations, educational programs, children’s activities, concerts and musical theater.

Philly's ever-evolving waterfront features loads to do in all seasons...

Once made up of undeveloped piers and underutilized public spaces, the Delaware River waterfront has become one of the most activated spaces in Philadelphia in the 21st century. That’s thanks to the opening of a number of exciting attractions and parks — Cherry Street Pier and Race Street Pier as well as seasonal spots like Spruce Street Harbor Park and Blue Cross RiverRink — and diverse and well-attended events throughout the year. Those gorgeous views of the Benjamin Franklin Bridge — which connects Philadelphia to New Jersey — don’t hurt, either.

Dine at a critically acclaimed restaurant (or two, or three...)

Laser Wolf, named one of the best new restaurants in the world by Condé Nast Traveler — Photo by M. Persico for Laser Wolf

There’s no way around it: Philly’s dining scene is special. The Wall Street Journal recently called the city “a booming cultural and culinary destination,” and Time placed Philadelphia on its “World’s Greatest Places 2021” list in part because ​​”the local culinary scene is as vibrant as ever.” So what makes the city’s food and the people who create it so irresistible?

For starters, chefs choose Philadelphia for their passion projects; it’s where they can run their (usually small) restaurants and fully commit to their vision. And it’s a place where they can pivot if they need to (like during a global pandemic, for example) and still thrive.

What you get in Philly is diversity of all sorts: in cuisine, in price, in formality. Options include street food, James Beard Award winners out the wazoo, hundreds of bring-your-own-bottle (BYOB) restaurants, sidewalk seating reminiscent of European cities, bars with great food, craft pizza spots, vegetarian and vegan eateries (that aren’t just for vegetarians and vegans) and the storied Reading Terminal Market and Italian Market. And, of course, all of the Philly classics: cheesesteaks, roast pork sandwiches, hoagies, pretzels and water ice.

Bonus: More Things to Do in Greater Philadelphia

Looking for even more great things to do in Greater Philadelphia? Of course you are! And in Greater Philadelphia, there is so much to explore, discover or rediscover, from buzzed-about attractions and restaurants to hidden gems and Countryside escapes. Find more ideas right this way for your next exploration.

read more
Close Collapse Map
Expand Map
Snap a photo in front of the Liberty Bell
Pose with the Rocky Statue & run up the "Rocky Steps"
Enjoy an authentic Philly cheesesteak
Tour Independence Hall, the birthplace of the United States
Visit the famous LOVE sculpture
Chow down on food from dozens of vendors at Reading Terminal Market
Visit the awesome museums on the Benjamin Franklin Parkway
Amble through the world-renowned Longwood Gardens
Explore Philly's hip waterfront
Dine at a critically acclaimed restaurant (or two, or three...)
Bonus: More Things to Do in Greater Philadelphia
Advertisement
Advertisement