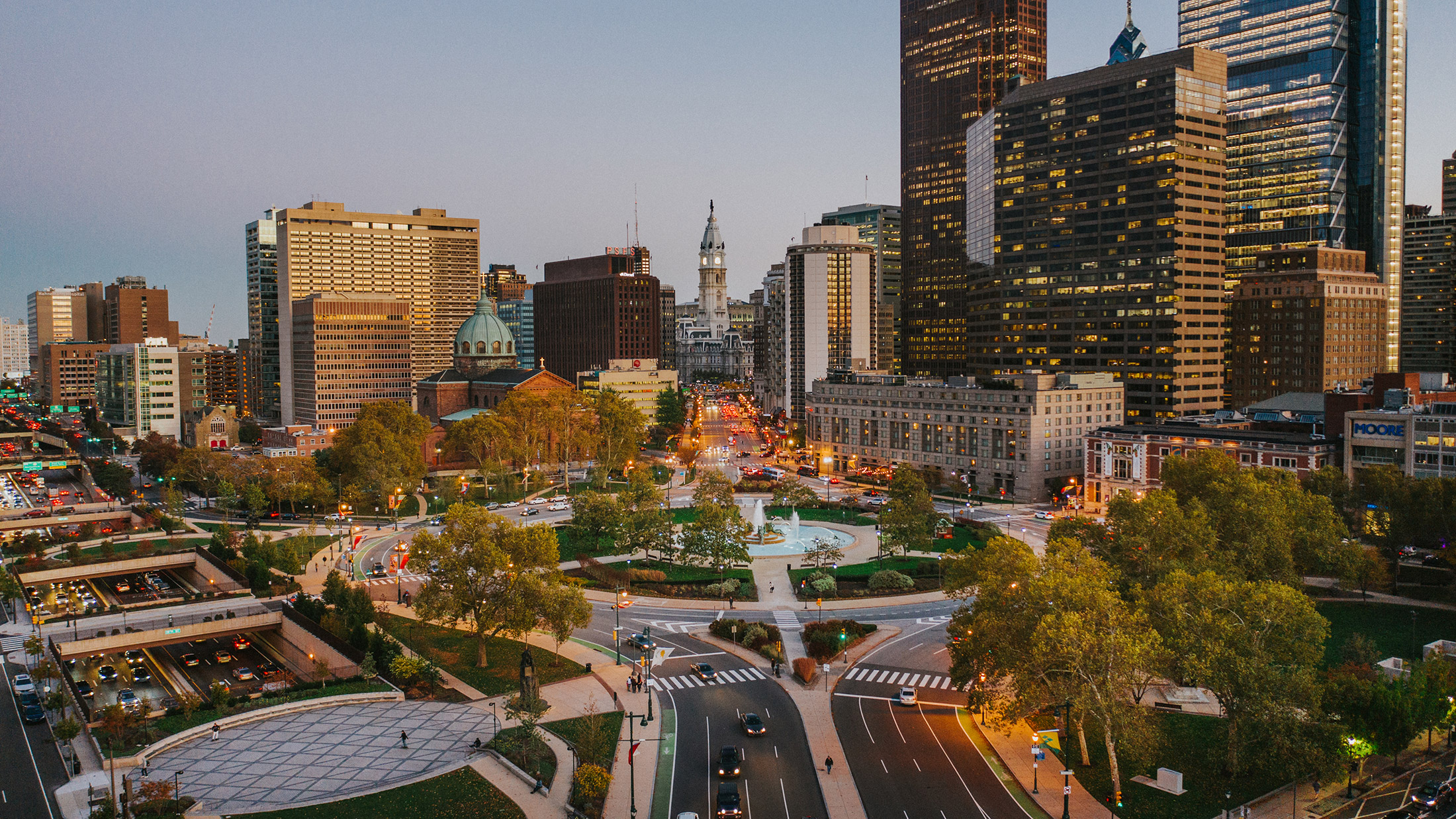 See the city by foot, by bike, by bus and more

Year after year, Philadelphia is rated as one of the best walking cities in the country. And it’s no wonder why – the city layout is simple to master and our neighborhood streets are filled with fun and diverse shops, restaurants, museums, parks and people.

The compact Center City boasts founder William Penn’s easy-to-follow grid street design. It spans just 25 blocks between two rivers: the Schuylkill and the Delaware. In between, the north/south streets are numbered and the east/west streets have tree names (e.g., Walnut, Spruce, Pine).

And when the feet get tired, there are plenty of options for getting around town — some practical, some just plain fun.

Philadelphia has become one of the most bike-friendly big cities in the country with dedicated bike lanes on city streets, hundreds of miles of trails and a growing number of bicycle commuters.

Philly is more bike-friendly than ever with Indego, a city-wide bike sharing service that offers rentals starting at just $4 per ride.

Launched in 2015 with 1,000 bikes and 100 stations, Indego continues to expand its program, adding more than 40 new stations and 300 additional bikes over the last two years. Stations are located throughout the city, from the Delaware River across the Schuylkill River into West Philadelphia and University City, and from South Philadelphia to North Philadelphia, including on Temple University’s main campus.

Cyclists can walk up to any Indego station and check out bikes for trips around the city 24 hours a day, seven days a week (riders are encouraged to follow the rules of the road and to always wear a helmet). Using a touchscreen kiosk, bikes are released from their docks when payment is made with a credit card or a pre-paid Indego Key. This quick and convenient system also allows bikers to return rentals to the nearest station after their ride is complete.

Indego is an initiative of the City of Philadelphia and is sponsored by Independence Blue Cross.

The most convenient way to see some of the city’s top attractions is aboard the Philadelphia PHLASH Downtown Loop. Single rides are just $2 per person or $5 for an all-day pass. Children 4 and under, seniors and SEPTA pass and key card holders ride FREE. Attractions accessible via PHLASH’s visitor-friendly stops across the city include Penn’s Landing, Independence Mall, The Franklin Institute, Philadelphia Museum of Art, Philadelphia Zoo, Please Touch Museum and many more.

Aside from walking, Philadelphia’s excellent transit system is the best way to get around town. Both accessible and bike-friendly, SEPTA (Southeastern Pennsylvania Transportation Authority) is one of the most comprehensive bus/subway/commuter-rail systems in the United States, consistently ranking in the Top 5 for its sheer size and in the Top 10 as one of the nation’s best. SEPTA’s vast public transportation network will get you anywhere you need to go — or at least very close.

The new SEPTA Key fare program, which replaces tokens, passes and paper transfers, is a convenient and easy way to get around the city. The “stored value” cards can be loaded and reloaded with the fare that best meets your travel needs —Weekly TransPass, Monthly TransPass, One-Day Convenience Pass, Travel Wallet (funds are used like tokens and transfers) — with the added benefits of more payment options, including online and at kiosks, and protection against loss or theft for registered cards.

SEPTA Key cards use chip technology, allowing riders to pay by simply passing it over the turnstile validator. New features and benefits will be added as part of the continuing rollout of the SEPTA Key fare program.

You can also explore the Philadelphia region with the Independence Pass, which allows unlimited travel on any and all SEPTA buses, trolleys, subways and trains, taking you everywhere from Bensalem to the Phillies, from Alden to the Art Museum or Springfield to South Street. One-day individual passes are $13, while a family pass for up to five people is $30 (at least one family member must be 18 years old). Passes may be purchased from the conductor on any Regional Rail train, at SEPTA Ticket and Sales Offices, and online using the button below.

The Broad Street Line is great for going to a game or concert at the South Philadelphia Sports Complex, getting between hotels and cultural attractions on Center City’s impressive Avenue of the Arts, visiting one of South Philly’s famous Italian restaurants, or getting to one of the many activities and cultural institutions in the burgeoning neighborhood surrounding Temple University in North Philadelphia.

SEPTA Regional Rail, Philly’s extensive commuter train service, connects you with all of the surrounding areas to conveniently take you to popular destinations like East Falls, Manayunk, Chestnut Hill, Mt. Airy, Ardmore’s Suburban Square, Villanova, Swarthmore, Doylestown and Downingtown. Leaving on a jet plane? SEPTA’s Airport Line will take you from Center City to Philadelphia International Airport in under 25 minutes.

SEPTA’s extensive bus system serves a number of neighborhoods and even more destinations throughout the five-county region. Routes are designed to connect at nearby intersections, as well as with terminals, loops and transportation centers, where riders can continue their journeys. Several “Night Owl” bus routes run 24 hours a day.

View All Bus Routes and Schedules

Go old school and hop on one of SEPTA’s Subway-Surface Trolley Lines, which operate on street-level tracks and underground in West Philadelphia, North Philadelphia and Center City. Select trolleys also service the surrounding Towns of the Philadelphia Countryside.

View all trolley routes and schedules

In addition to SEPTA, Center City is also served by the PATCO train line. Connecting Philadelphia to parts of Southern New Jersey, PATCO — known locally as “The Speed Line” — transports more than 38,000 riders every day with 13 station stops. Continue your travels in Philly by transferring to SEPTA’s Market-Frankford Line from the 8th & Market Street stop or to the Broad Street Line from the 12-13th & Locust Street station (additional fare required).

Taxis can be found all over town and are a great way to get to various destinations throughout the city if you’re in a hurry. Cabs are easy to find at transportation hubs like the Philadelphia International Airport and  William H. Gray III 30th Street Station, but you can also hail one the old fashioned way on most busy city streets.

Taking Uber or Lyft is a convenient and easy way to navigate Philadelphia. Just download the Uber or Lyft app, sign up for an account, hail a ride using your phone and start exploring the city.

For those seeking luxury, there are several dependable limousine services in the region offering everything from private cars to stretch rides.

If you’re renting, all major car rental companies have outlets at the airport or in Center City; New Yorkers in particular will find car rentals a bargain in Philadelphia.

For those looking for more long-term car rental options, try out car sharing services like Enterprise CarShare and Zipcar.

Parking in the City

Driving into the city in your own car or a rental? Then you’ll definitely want to be familiar with Philly’s parking regulations to avoid ticketing or towing. With thousands of metered spots and plenty of affordable garages, it’s easy to stash the car and enjoy your visit. Click the button below to learn more about parking in Philadelphia.

More on Parking in Philadelphia

Philadelphia proudly offers visitors the ability to explore the city with a sense of independence.

In 2019, the city welcomed 46 million visitors and with a wealth of accessible attractions, travelers of all abilities can be confident that they have choices in the City of Brotherly Love.

The Accessible Philadelphia guide is the first stop for people with disabilities who are considering trips to the city and making plans to explore. The guide serves as a jumping off point to connect residents and visitors to resources that help them navigate hotels, historic sites, museums, transportation and more.

Click the button below to learn more about accessibility in Philadelphia.

More on Accessibility in Philadelphia

More Ways to Get Around

Boarding an open-top Big Bus, modeled after the famous double-decker buses in London, is just one more way to see Philadelphia’s top attractions. Sightseers can hop on and off at more than 25 stops or sit back and enjoy the beauty of the city during the 90-minute tour. One-day, two-day and three-day tours are available.

Another option is the Philadelphia Trolley Works tour. Take in Philadelphia’s famous sights and attractions aboard a Victorian-style, open-air trolley, led by colorful guides who entertain riders with fascinating and humorous stories about Philly’s history. Bonus: tickets for Big Bus Tours and Trolley Works are interchangeable.

Take an excursion across the Delaware River on the RiverLink Ferry, which connects Penn’s Landing in Philadelphia to the Camden, N.J., waterfront. Attractions on both sides of the river include Spruce Street Harbor Park, Adventure Aquarium, Independence Seaport Museum and Battleship New Jersey. Service is seasonal.

There are even more ways to explore the City of Brotherly Love. Glide around in style on a Philadelphia Segway Tour, get a bird’s eye view of the city from the Philadelphia Zoo balloon and more.