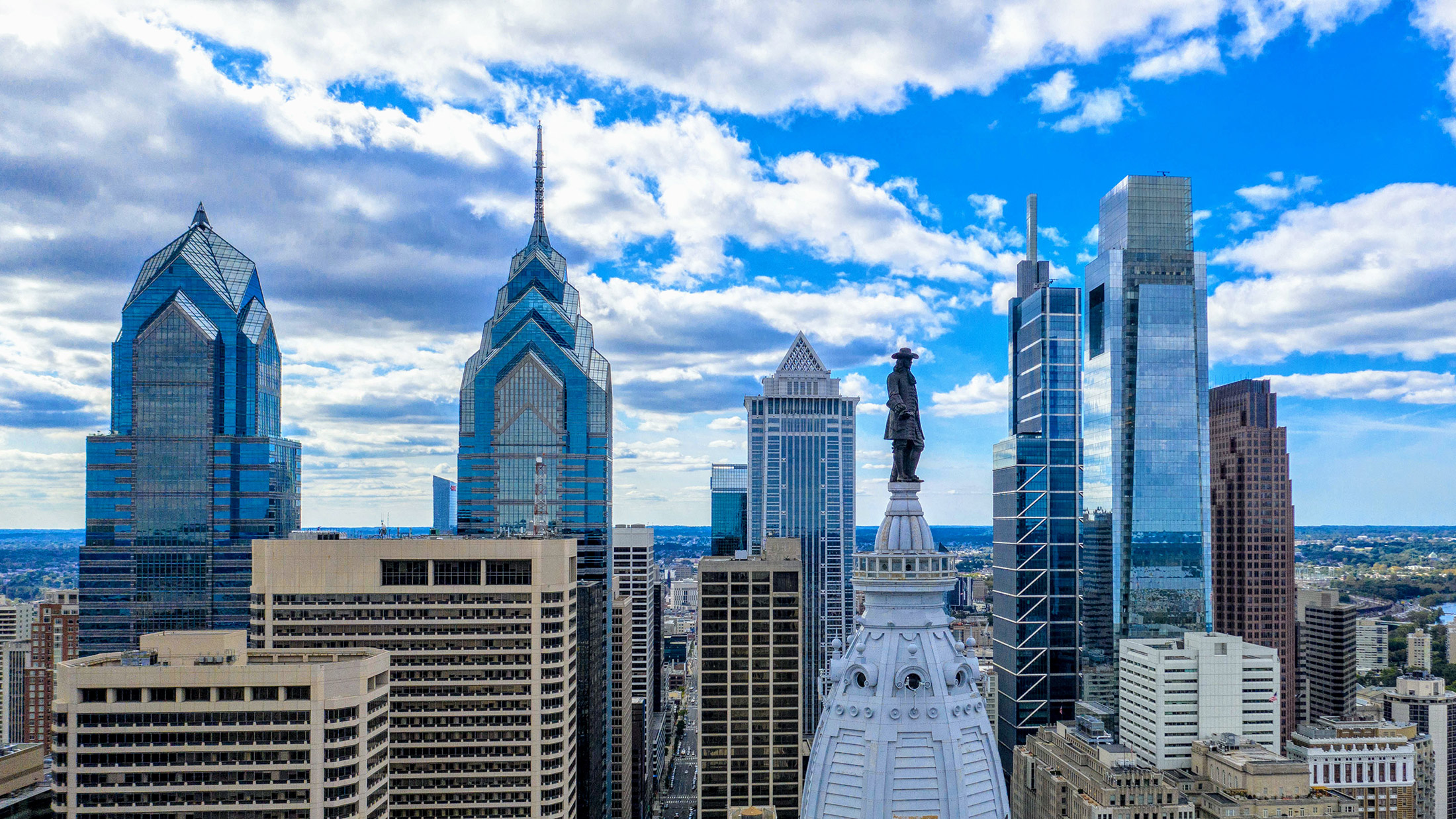 Encompassing the city’s busiest and most densely packed cultural, historical and entertaining neighborhoods, Center City — bracketed east/west from the Delaware River to the Schuylkill River, and north/south from Spring Garden Street to South Street — features Philly’s premier downtown area as well as an ever-expanding skyline.

It’s also home to the city’s most historic neighborhoods — including Old City and Society Hill — as well as many tourist attractions, on Independence Mall and elsewhere.

As a primary destination for travelers, Center City boasts a majority of the biggest and toniest hotels in the region, and more restaurants, bars and cafes than any other part of the city. Sparkling nightlife and dining options under the Center City umbrella include Chinatown, Rittenhouse Square and Old City.

At its nexis point, where Broad Street crosses Market Street, resides Philly’s historic and beautiful City Hall, with its 37-foot-tall statue of William Penn presiding 548 feet over the city proper. Penn was the tallest point in the city up until the building of One Liberty Place in 1986.

Center City, comprised of a number of different and vibrant neighborhoods, reflects different aspects of the city and the people who live there.

Starting from the east, Old City is a nightlife stalwart, with bars, restaurants, cafes and galleries offering a fun contrast to the wealth of history (Independence Hall, Liberty Bell) in the area.

South of Old City sits the Society Hill. Whereas the Hill remains largely residential (and is home to many of the still-standing colonial-era houses in Philly), South Street remains a busy thoroughfare for the adolescent-to-teen crowd, cramming dozens of eateries, galleries, sneaker stores, risque lingerie emporiums and the like on to a single street.

Midtown Village lies, as you might expect, midway between the historic monuments of Independence Mall and the upscale cosmopolitan scene of Rittenhouse Square, and is the center of the city’s thriving LGBT community. To the north of Midtown, through the ornate Friendship Gate, and just east of the Pennsylvania Convention Center, lies Philly’s historic Chinatown, with its many restaurants, cafes, bars and shopping spots.

Being the locus of traffic and commerce in the area, Center City is easily the most accessible part of Philadelphia. Travel from New York, New Jersey or other nearby areas either via bus, train or car over the Ben Franklin Bridge; from the rest of the country via the Philadelphia National Airport, or on the Market Street or Broad Street lines of the SEPTA system.

Center City is comprised of a number of different and vibrant neighborhoods.

Independence National Historical Park, which welcomes more than four million visitors each year, features more than two dozen places of historic significance, including the aforementioned Liberty Bell and Independence Hall. Those sites are joined by other nearby museums like the National Constitution Center, the National Museum of American Jewish History, the African American Museum and more.

For the more artistically minded, the spectacular Kimmel Center, home to the renowned Philadelphia Orchestra, and the Academy of Music attract the musically inclined; theater-goers will find what they’re looking for at the Merriam Theater, the Wilma Theater or any of the other stages in the district; and fine arts lovers can lose themselves at the Pennsylvania Academy of the Fine Arts, which displays a vast collection of American art and treasures by local and national luminaries such as Charles Willson Peale, Thomas Eakins and Violet Oakley.

Literary-minded visitors can view the priceless manuscripts of authors like James Joyce at the Rosenbach Museum, while science folks — and those intrigued by peculiarity — can take in the medical anomalies of the Mütter Museum.

More Things to Do Nearby

Philadelphia is a city of vibrant neighborhoods bordered by a region of charming towns, with each area owning a distinctive personality. Explore the neighborhoods and towns in and around Philadelphia — their storied streets, interesting attractions, buzzed-about restaurants and year-round happenings.

Use the menu above to explore Philadelphia Neighborhoods